The beneficial effects of fever-range temperatures on the immune system have been studied in depth through the years and appear to include:

It’s interesting to note that many of the conditions we see regularly in modern day integrative medicine practice are thought to involve defective antigen presentation. Antigen presentation is the process whereby foreign material is recognised, and antibodies are produced to nullify the foreign material. Antibody production is part of the acquired immune system, which has a much more co-ordinated and specific effect than the innate immune response, which is related to releasing a series of compounds called cytokines, which try to deal with foreign invaders in a non-specific way. Often times, if acquired immunity is not functioning correctly, then an overactive innate immune response causes a whole body inflammatory process.[iii]

This appears to specifically occur in cancer and also in the condition known as chronic inflammatory response syndrome (CIRS), as hypothesised by the research team led by Ritchie Shoemaker MD. This defect in antigen presentation is speculated to be due to a genetic mutation in human leucocyte antigen (HLA) coding genes, which lead to an inability to produce a proper antibody response after exposure to small negatively-charged biotoxins. These biotoxins can enter into the system through exposure to water-damaged buildings (WDB), tick bites or rarer causes.[iv]

In many forms of cancer, a similar situation appears to be present whereby the host immune system is often unable to complete antigen presentation against the cancerous material, thereby leading it able to evade immune mechanisms and progress. In a normally functioning immune system there are a number of mechanisms which should lead to controlled cell death (apoptosis) of cancer cells. However there tends to be a systematic loss of these mechanisms in cancer, leading to an uncontrolled proliferation of cancerous cells.[v]

Research in hyperthermia has only begun over the last few decades. This initially started with the notion of direct tumour cell killing effects with high temperatures (e.g. achieving an internal body temperature of 42 degrees C for one or more hours), later studies have zoned in on the immunological effects of hyperthermia.

One of the clearest effects of hyperthermia is the release of heat shock proteins (HSPs) from the tumour. HSPs act as “danger signals” which lead to a special type of immune cell called dendritic cells priming the immune system to perform antigen presentation in a more effective fashion. As a result of this more effective antigen presentation, a more co-ordinated immune response is possible, and cancer breakdown (apoptosis) is much more likely. [xvi]

Secondly, there is clear evidence that oxygenation in tumours is improved during and for up to 1-2 days after mild hyperthermia. This appears to be related to an increase in oxygen perfusion in cancerous tissues, as described by Dr Song, and colleagues from the University of Minnesota Medical School.[vii]

The presence of cells low in oxygen (hypoxic cells) in tumours is believed to be a major factor in limiting the effectiveness of radiotherapy, certain chemotherapy drugs and even phototherapy. This has been postulated to be the reason that hyperthermia has been shown to enhance the effect of radiotherapy and chemotherapy in certain tumour types.[viii]

However the cellular changes induced by hyperthermia may give even greater clues as to how it aids treatments, such as IV antibiotics for infection to chemotherapy and radiotherapy for cancer, to work more effectively. Some of these changes include:

These cellular changes also can be hypothesised to be part of the mechanism by which hyperthermia enhances the effect of many treatments for cancer, and severe infections.[ix]

In 2015, a group of researchers from Japan released a study investigating the effect of mild hyperthermia combined with hyperbaric oxygen therapy (HBOT) for improving the anti-tumour effects of the chemotherapy agent, carboplatin, an agent commonly used in ovarian cancer management. It was found that the sequence of carboplatin followed by mild hyperthermia followed by hyperbaric oxygen therapy was most effective, and that each intervention was additive in terms of its benefit.[x]

In 2017, a group of researchers from Istanbul, Turkey, released a case report of a 29-year old woman with stage IV triple-negative invasive ductal carcinoma of the breast. This type of cancer typically has a very poor prognosis. In the case of this patient, the patient received metabolically supported chemotherapy, with the addition of a ketogenic diet, hyperthermia and hyperbaric oxygen therapy as a therapeutic strategy. The rationale for this therapy is the hypothesis put forward by Dr Warburg in 1956, that a change in metabolism is the fundamental cause of cancer. This is based on the idea that most tumours are glycolytic, rather than utilising oxidative phosphorylation for energy production. The case described achieved a complete clinical, radiological and pathological response after receiving a combination of these treatments. [xi]

Of course this case study can not be cited as definitive proof of metabolic treatment, including hyperthermia, for cancer, however it should most certainly provoke further clinical trials on the approach. Indeed applying heat to the body, as Hippocrates stated, may well turn out to be a vital tool in treating cancer and various other chronic inflammatory conditions. 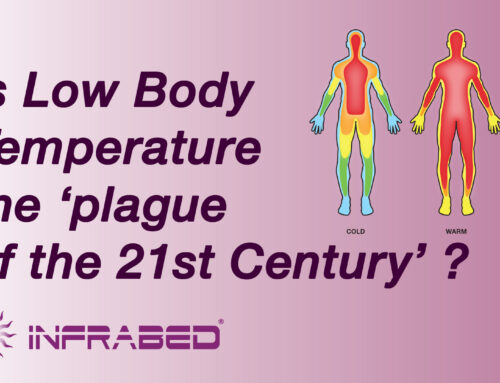 Is low body temperature the ‘plague of the 21st century?’

Is low body temperature the ‘plague of the 21st century?’